At the age of ten, Rabbi Alan Greenspan was inspired by a dynamic religious school teacher to become observant. After completing public elementary school, he attended Mesivta Tifereth Yerushalayim, where he came under the profound influence of R. Moshe Feinstein, zt"l. His B.A. is from Yeshiva University, where he received semicha from Rav Yosef Dov Soloveitchik, zt"l.

In 1962, he entered the United States Army for a two-year tour. He quickly realized the great kiruv (outreach) opportunity he would have working with Jews who were young and generally had weak Jewish educations.

A military chaplain's personal life is challenging in many ways: long separations from family, dangers to life in combat, loneliness, rarely a chavruta, and few Jews who are shomrei mitzvot. Elaborating, Rabbi Greenspan points out that “one of the difficulties of Army life was constant movement from place to place. Therefore, my wife and I needed to make the Jewish education of our own children a high priority. In some instances, we were fortunate enough to be close to Jewish schools. We taught them at home the rest of the time." Indeed, this concern prompted him to take a break from active service for five years, during which he served as a congregrational rabbi in Liberty, New York.

On the professional level, he notes, “a Jewish chaplain needs to be creative in motivating young Jewish men and women and, in many instances, their families; one could not rely on their attendance at various programs. I had to reach them individually or in small groups, unless I was stationed on a base that had significant numbers."

Serving during the Vietnam War was especially demanding. He usually spent four days a week in the field visiting Jewish soldiers. Through mailings and local announcements, they were informed when he would be in their location. His usually travelled to them by helicopter for visits which generally included a prayer service, a class, counseling, and visiting the wounded. He appointed and trained lay leaders in major field locations to conduct services on Shabbat. Since Saigon had the largest concentration of Jews, he was usually there for Shabbat and holiday services. When soldiers requested kosher food, he arranged to supplement what was available in the mess hall. The Jewish War Board sent a supply of canned products. In addition, he started a campaign all over America called: “S.O.S. – Send Over Salamis”. He wrote about these experiences in his book, “With A Siddur And A Salami”. Summing it up with a vort, he said, “Since the Hebrew word krav means war, my mission was to do kiruv as if it were krav.”

Until his retirement in 1987, he served in Korea; Fort Knox, Kentucky; Fort Benning, Georgia; Vietnam; Fort Dix, New Jersey; and the Panama Canal Zone. He also served on the faculty of the United States Army Chaplain School, and was selected by the Army to receive an advanced degree at Columbia University Teacher’s College. For his decades of service, Chaplain Greenspan was honored with the Bonze Star Medal, Air Medal, Meritorious Service Medal and the Amy Commendation Medal.

When asked if he would do it again, he said, “It is hard to measure success when you move around every one to three years as do your soldiers. So there is little opportunity to get feedback on how effective you have been.”

He then referred to a recent article about some of his adventures in the Jerusalem Post, Seder In Saigon – 1966. One reader, a United States Air Force pilot who spent considerable time in Vietnam, wrote to the Post: “Thanks, Rabbi. I remember you, the men and the seder well. I served in country from 1965 to early 1968. I would not want to do that again. But, I would not, by the same token, trade so much as a single moment, of being at that seder for anything.”

He and his wife, Gala, made aliyah to Jerusalem in 1989. Their children and grandchildren live in Efrat. 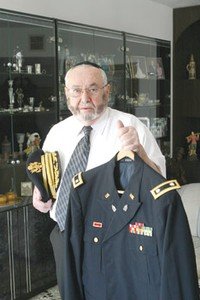 Back to profiles page

Find out more or adjust your settings.

This website uses cookies so that we can provide you with the best user experience possible. Cookie information is stored in your browser and performs functions such as recognising you when you return to our website and helping our team to understand which sections of the website you find most interesting and useful.

Strictly Necessary Cookie should be enabled at all times so that we can save your preferences for cookie settings.

If you disable this cookie, we will not be able to save your preferences. This means that every time you visit this website you will need to enable or disable cookies again.